As part of our latest  Aran Hertitage Collection, our crew set out to explore the more unique shapes and patterns of our home of Inis Mor to pay homage to the natural beauty of an island that long ago inspired the original stories of our famous Aran stitches. 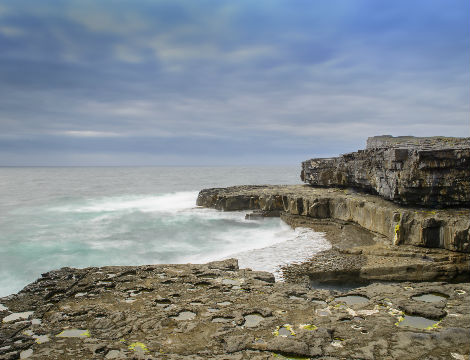 Some of the most breathtaking scenery lies in the more remote parts of the island so although it wasn't an an easy task to trek to these locations, it was worth it in the end and we made sure we had some fun along the way. Our crew consisted of Brand Manager, Laura Mac Sweeny, Photographer, Pawel Nowak, Hair & Make-Up Artist, Roisin Derrane and Models Sarah Tansey and Padraic Pendric from Andrea Roche modelling agency.

The first story we wanted to portray was the story behind the Honeycomb stitch, whose meaning was said to be derived from the reward of hard labour and the hard working honeycomb bee.

Whilst cycling around the island - the best way to travel in these parts - we came across these beautiful rocks sprinkled with a honeycomb of Irish moss and thought what better location to act out a scene of joyful bliss after the labours of hard work with our two models Sarah and Padraic and our trusty companion, Rufus the dog. We love the end result. 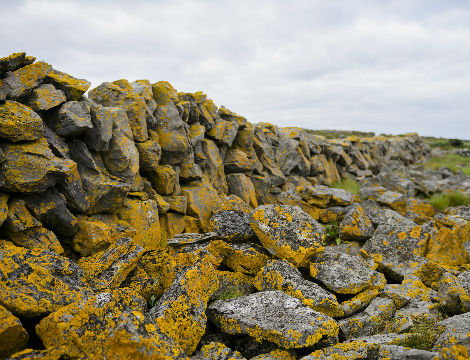 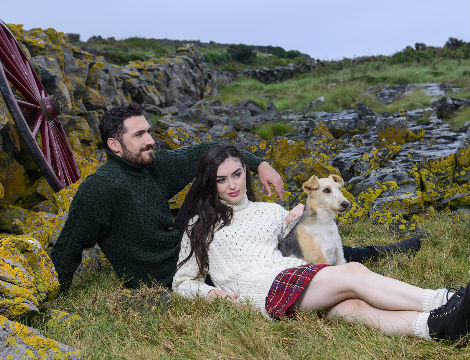 Next on our list was to capture the beauty of the stone walls of which the island of Aran is famed for and for which the Trellis stitch was said to be inspired. Although, there are a great number of stone walls to be found on the island, we favoured these high walls filled with grass and character, near the strand of Kilmurvey beach which were built long ago to block out the strong wind from the atlantic seas.

At this stage the weather gods were not looking favourably upon us, however we weren't going to let a little rain ruin our chances of getting that perfect shot. 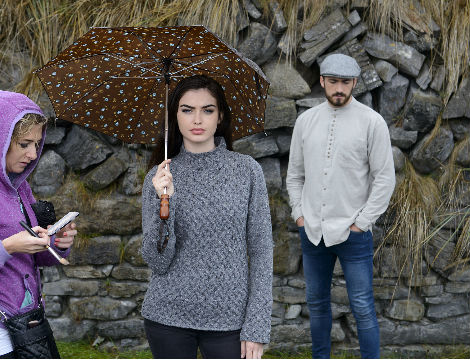 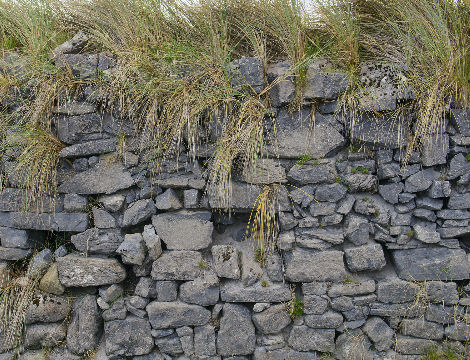 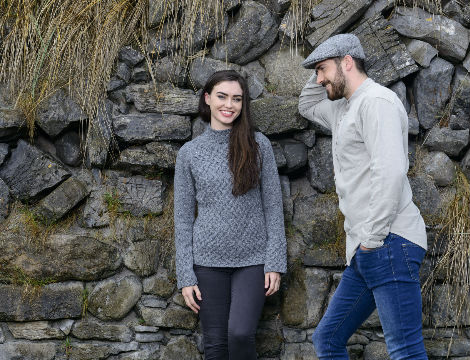 Shortly after, we headed down to the deserted shoreline of Kilmurvey beach where we shot our Lattice Stitch Sweater, (inspired by the old Fishermen's baskets) and were left mystified as always by its untouched white sands and turquoise blue waters . 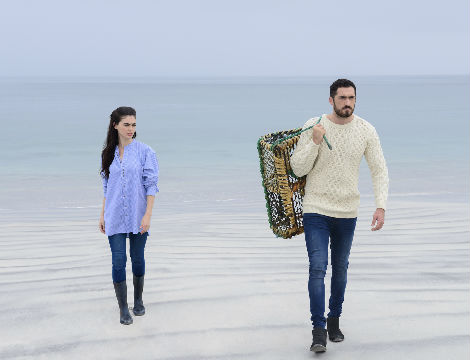 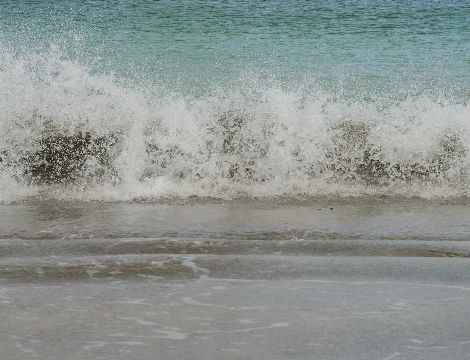 With the rain still threatening as it tends to in these parts, we decided to battle on and make our way up to the north of the island to Pol na bPeist (Worm Hole in english) where lies the most magnificent views of the cliffs of the island. Here we shot the beautiful Chevron stitch sweater. The Chevron stitch is constructed through the pattern of increases and decreases and is said to mirror the formation of the waves that crash against the cliffs around these parts of the island. When we finally reached the perfect point on the cliff face, we didn't want to leave. 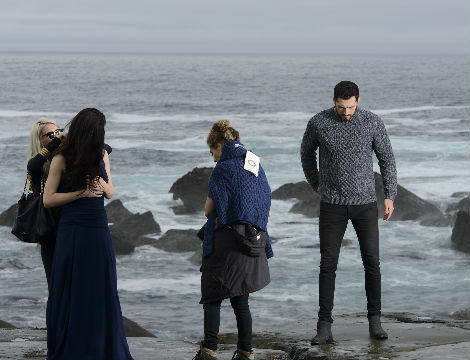 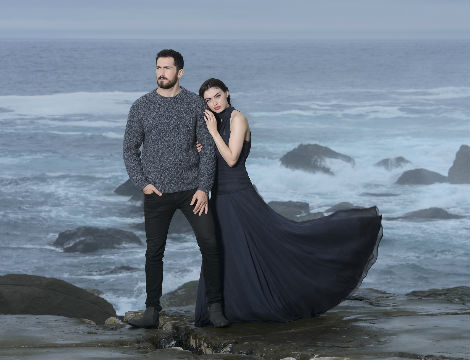 Not far from here are the most unique displays of carrageen moss and seaweed, famed for once being used as a source of food and fertiliser in ancient times and the inspiration behind the filler or Moss stitch. With the rain still hailing down upon us, we got our beautiful shot amidst the striking green. 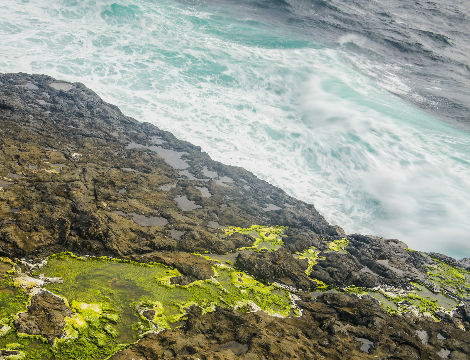 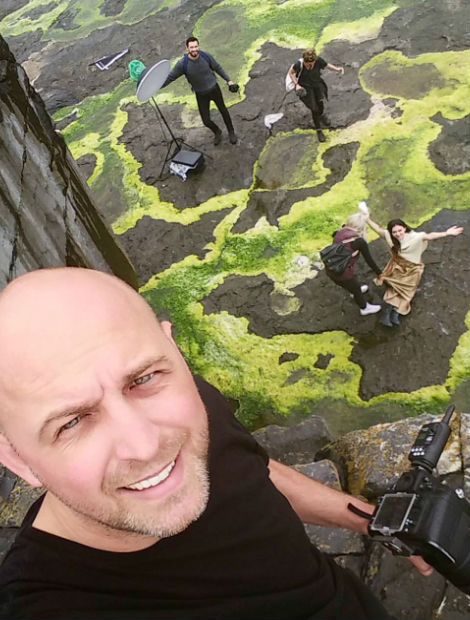 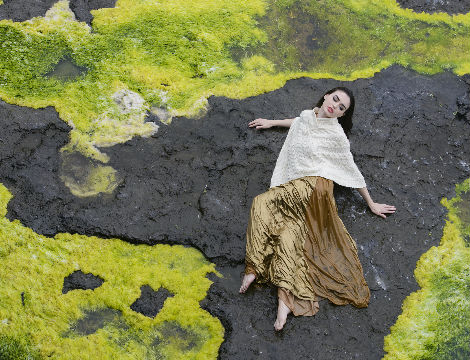 Doing this shoot undoubtedly reminded us of the striking and natural beauty of our home and we hope you've enjoyed it too.

It truly is a wondrous place so if you haven't already graced its shorelines then get booking those tickets as it's definitely one for your bucket list.

That's all for now folks, until next time, slán go fóill,

The Team at the Aran Sweater Market. 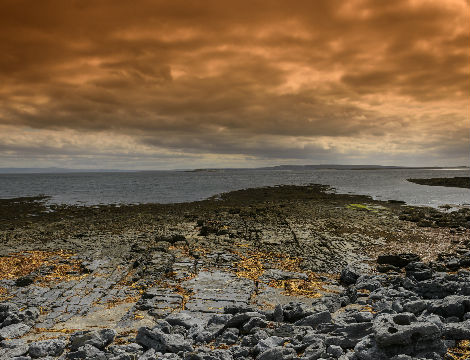